André Deslauriers will defend his PhD thesis on the 1rst of Juli 2020 at 14.00 (Copenhagen time). 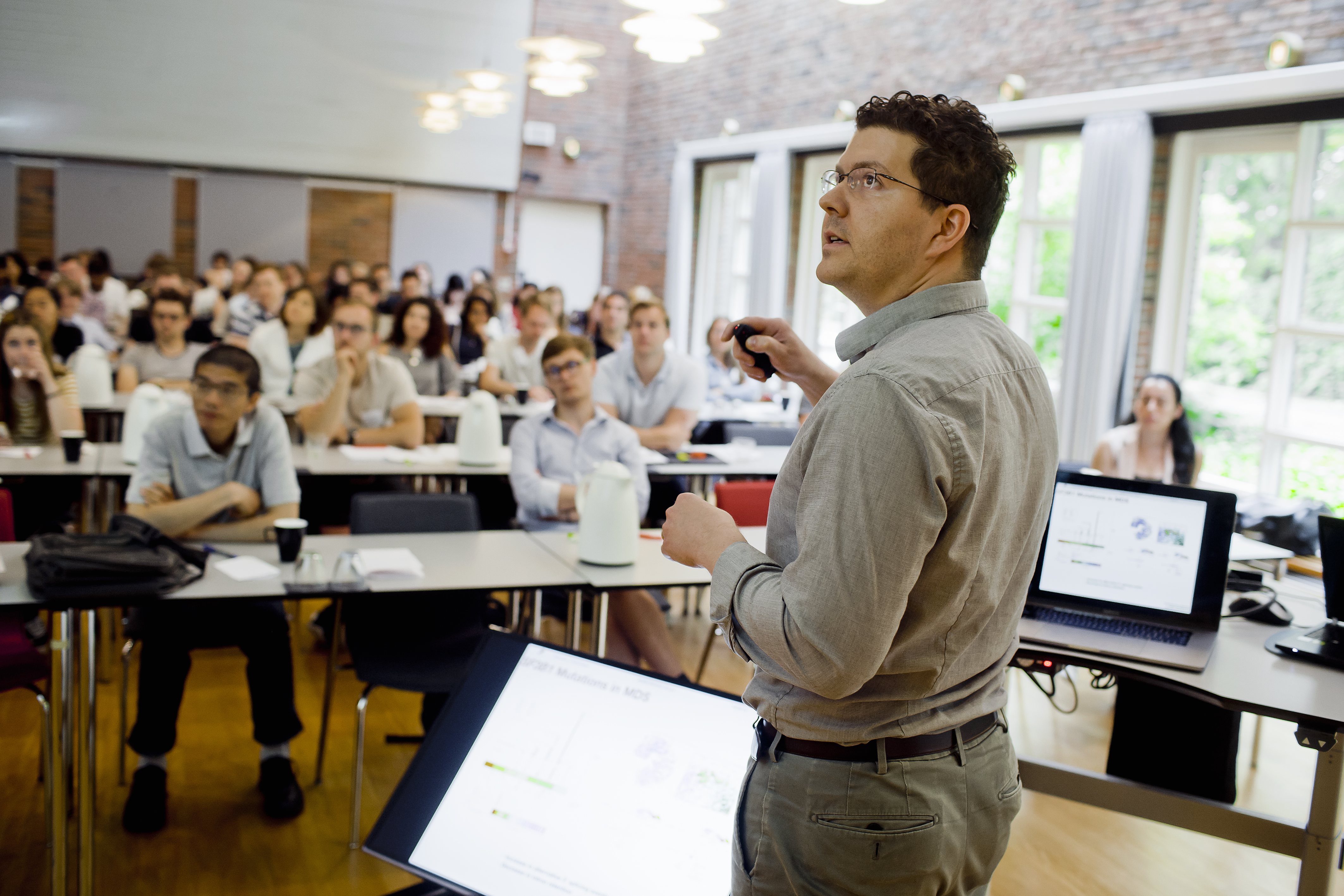 The PhD thesis deals with the generation and characterisation of iPSC cell lines from cancer patients with myelodysplastic syndromes (see abstract below).

Please contact Andre for copy of the thesis:  deslauriers.andre@outlook.com, deslaura@mskcc.org

The assessment committee consists of:

The supervisors during the PhD study were:

Myelodysplastic syndromes are a heterogeneous group of clonal hematological disorders characterized by the ineffective maturation of blood cells, cytopenias, and an increased risk of progression to acute myeloid leukemia (AML). Sequencing studies of MDS genomes have outlined the repertoire of disease defining mutations, also referred to as driver mutations, including recurrent mutations in splicing factor (SF) genes. Splicing is an integral biological process by which introns are cleaved from pre-mRNA molecules. Alternative splicing ensures that multiple transcripts can be generated from the same gene, allowing for the generation of different protein isoforms in response to cell states and requirements. Somatic mutations in SF encoding genes occur at specific loci in a heterozygous missense manner. SF mutations are mutually exclusive with one another (i.e. do not co-occur in the same cell) and are associated with specific patterns of alternative splicing, indicative of gain-of-function mutations. The downstream consequences of SF mutations and their role in disease pathophysiology remains uncertain.

SF3B1 is the most commonly mutated SF gene in MDS (~30%). SF3B1 mutations occur early in the onset of MDS, often as initiating clonal events. While MDS patients typically have more than 2-3 somatic mutations, SF3B1 mutations frequently occur as isolated mutations. SF3B1 mutations are pathognomonic of the WHO subgroup of MDS-RS, which is characterized by ineffective erythropoiesis and iron accumulation in the mitochondria. To date, the majority of disease models for SF mutations are engineered mice that lack conserved intronic sequences and consensus binding motifs found in human genomes. Human models include primary patient samples which are clonally and cellularly heterogeneous and can’t be maintained or expanded in current ex vivo culture systems. These features limit our understanding of the role of SF mutations in MDS pathophysiology. For these reasons, I developed iPSC lines from MDS-RS patients with isolated SF3B1 K700E mutations to study the SF3B1 effect on downstream biological networks. For this, I successfully generated genetically matched pairs of iPSC lines from multiple patients for functional and molecular studies with the final goal of characterizing the underlying mechanisms by which mutant SF3B1 drives and sustains the MDS-RS phenotype.

Using directed hematopoietic differentiation protocols, I demonstrate that SF3B1-mutant cells exhibit a block in myeloid and erythroid differentiation, and a growth disadvantage compared to normal cells, consistent with findings in other cellular and mouse models of SF mutations. Using purified CD34+/CD45+ hematopoietic progenitor cells (HPCs) from 3 SF3B1 K700E and 3 SF3B1 WT iPSC lines from each of the 3 patients (total 18), I performed RNA-Seq analysis to include differential gene iv expression (DGE), alternative splicing (AS), and differential transcript usage (DTU). From a total of 1822, 1334, and 1976 deregulated genes across all 3 patients, we identified 306 which were common to all patients. We found 213 AS events between mutant and WT cells and common to the 3 patients, of which 5 were associated with changes in expression of the target gene. When considering event type, alternative 3’ splice site (SS) was the most common (98/213, 46%), in concordance with previous reports. We found 188 DTU events affecting 136 genes in common across all 3 patients, of which 7 were associated with DGE. To prioritize key altered splicing events, we developed an analytical platform to integrate DGE, AS and DTU analyses. With this approach, we identified 36 AS events linked to 28 genes with at least one DTU event and, additionally DGE or high ranking AS events (FDR < 10-16) or both. This set of 36 AS events was sufficient to infer SF3B1 mutational status across 28 samples frompatients with MDS.

Overall, I have generated a new disease model allowing for the study of SF3B1- mutated molecular mechanisms in MDS, as well as a means to validate and target relevant effectors for translational studies. The targets identified here indicated that SF3B1-mutated MDS-RS is driven by more than a single event, likely the accumulation and interaction of multiple alternative events, which will guide our future research into the oncogenic effects of SF3B1 mutations.