On Monday, 6 November 2017, Professor Janine Erler from BRIC will receive the Lundbeck Foundation's Research Prize for Young Scientists, which is a personal, honorary award of DKK 300,000, given to a young scientist under the age of 40. The prize is awarded once a year to acknowledge a particularly promising scientist who has produced outstanding research in the field of biomedical science.

- "Janine Erler is a researcher who can take on almost anything. She is a great talent, a skilled researcher, a popular lecturer, a much-used assessor for journals and foundations, a talented research leader and an expert communicator, who can see the commercial potential of her own research. With the 2017 Research Prize for Young Scientists we wish to recognise Janine's vital scientific contributions and dedication to using her research to create value for society," says Anne-Marie Engel, Director of Research at the Lundbeck Foundation. 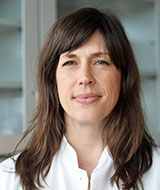 Janine Erler does research into how the microenvironment of tumours helps to stimulate cancer cell growth, invasion and metastasising. Among other things, she has shown that the LOX enzyme plays a main role in invasion and the spread of cancer by changing the environment around tumours, making it more favourable for cancer cells. Her laboratory recently developed a ground-breaking new method for exposing tumour and tissue structures by removing living cells and leaving the surrounding structure around the cells intact. In addition, she has established a project on precision medicine for patients with metastatic cancer together with clinical collaborators at Rigshospitalet.

- "It's a great honour to receive this prestigious prize – especially as the first woman to receive it. My aim in life is to reduce cancer patients' suffering. My research focuses on studying how cancer spreads, and what it needs to grow in new places, since this spreading is the reason for over 90% of all cancer-related deaths. It's a privilege to lead a team of talented researchers and to carry out this exciting research that hopefully will bring something good for the world. We're fortunate to have made several positive contributions to this field. I also highly value my cooperation with my clinical partners, which enables me to have a more direct influence on patients' welfare," says Janine Erler, Group Leader at BRIC.